A gm-less, storytelling, Descended From the Queen game for three to six people about  a ship, its crew, and the sea they sail on. It is a game about the relationships between those people, about relying on each other, about being an individual in a team.

Includes 52 story prompts and handpicked 12 public domain illustrations to be used as inspirations for your ship.

In order to download this game you must purchase it at or above the minimum price of $5 USD. You will get access to the following files:

All Hands on Deck.pdf 14 MB

Support this game at or above a special price point to receive something exclusive.

Community copies are free on an honor system. Feel free to grab one if you aren't sure you can afford it, are a member of a marginilized community, or playtested it with me. I'll add more as needed.

If you take a community copy from the pool, consider taking a moment to leave a positive review, comment, or rating to help boost the game's visibility.

All Hands on Deck is a descended from the queen game about sailing a ship. You each play a member of the crew, and tell stories about their relationships to each other, the captain and the ship.

So, we played All hands on Deck yesterday on New Years Eve. We sailed on The Queen under Captain Toby during the Golden Age of Sailing in a world similar to ours. We survived a storm with an entire orchestra including instruments on board (only one crewmember died when a gong went over the railing). No one dared to question the weird stories of our ship's cook Stella and everybody respected our medicus Doris, eventhough it seems she was practising with occult rituals when operating on the crew. And there were many many rumours about everyone on board, especially about our current destination because Capain Toby was leading us into unknown waters beyond our maps. Some said it was a rendezvous with a family member of the Captain, others claimed we were to exchange cargo (we had strange passengers on board) and a few whispered that there was a curse on Captain Toby: every 10 years the Captian has to meet with a Ghostship and pay their tribute, if they want to live on.
When the ship sank in the tentacles of a giant kraken, two of our crew left the ship, not wanting to die with our vessel, while one tried desperately to fight off the beast not realising they never had a chance until it was too late, so they went down with the ship. And the last crew member drowned as she watched on in awe as the Kraken took apart The Queen. For she chose a life on sea because she always wanted to see a Giant Kraken and finally saw one.
---
First off: we are all fans of For the Queen and have played it a few times, so it was really easy for us to get into the game and we really liked it and its maritime theme. I even used a piratey card deck which quite often had eerily accurate pictures to what about was to happen, esp. a Kraken (which was established quite early in the game, without the players knowing about the motif) on the King of Spades. We played for about 3 hours when we reached about the middle of the deck and forced the ending because it was a quarter to midnight. This is probably an unusual playing time but we were asking quite a lot of follow up questions about the answers the other players gave. And this is basically the only little critique we have: the questions in For the Queen are quite often a bit leading towards the Queen, so you are challenged to question her goodness or to make her seem ambiguous. This is something we missed in All hands on deck or rather we were under the impression this game is more about the Captain of the ship. We tried to recreate this with our follow up questions, which was no problem for us.
And now, as I am writing all this, I realise that you actually mention that the game is about "relying on each other, about being an individual in a team". We all totally totally missed that bit, maybe that needs to be more obvious? And we were also hoping for more questions which potentially bring some conflicts into the crew, akin to "Who is First Mate and why did the Captain choose them instead of you?" (Ace of Spades). Next time I'm facilitating it, I will also clarify the final question at the beginning after the set up, so everybody knows how the game will end.

That all said (well, written) we had a really fun experience playing your game. Thanks a lot, a Happy New Year to you as well as fair winds and following seas!
-Tim 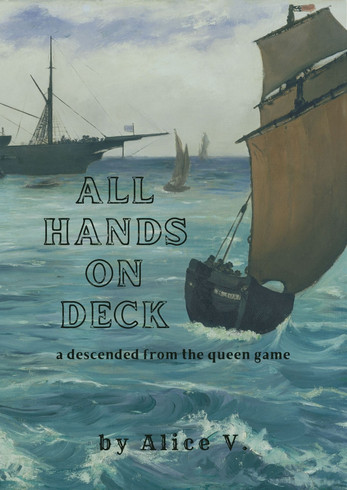 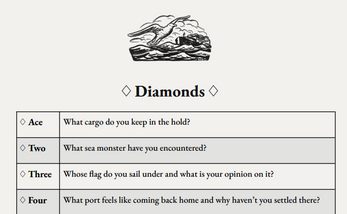